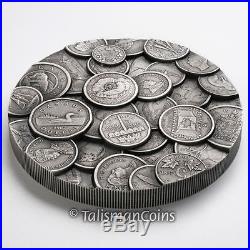 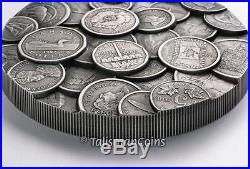 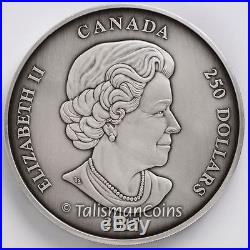 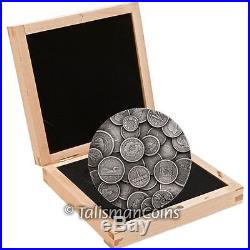 No Small Change Here! This ultra-ultra-ultra high relief monster is. TRULY HUGE AND RARE. As it traces the history of Canadian circulating coinage over the past 150 years in one kilogram of the world’s purest silver. You’ve never seen anything quite like this before – with a tiny mintage of just 500, get yours today! On July 1, 2017, Canada will celebrate the 150th anniversary of Confederation – the 150th birthday of a great nation! To commemorate this very special occasion, we bring you this truly unique coin that could only have been created and designed by the Royal Canadian Mint. Applying cutting-edge ultra high relief technology to its huge kilogram format, this is the Mint’s first coin to feature true-to-size recreations of circulation coin reverses and obverses from the last 150 years. Each coin featured on the reverse was specially selected to highlight key moments in Canada’s history since Confederation, from the effigies of the various Kings and Queens who have reigned over the Canadian constitutional monarchy, to the moments that have led Canada to the modern era. For a list of all the constituent coins, please see the list below. A Royal Canadian Mint first! To celebrate Canadas 150th birthday, the Mint’s Research and Development team came up with this unique ultra high relief one kilogram silver coin whose design reproduces reverses and obverses of historic Canadian circulation coins released over the past one hundred fifty years. Each featured coin is re-presented in its actual, original size and diameter! The stunning antique finish accentuates and heightens the depth, detail, and patina of a design the likes of which we guarantee you’ve never seen before. One-of-a-Kind Pure Silver Kilo with Antique Proof Finish in Solid Canadian Maple Wood Display Box. Featuring approximately 35 obverse and reverse images from previous and current circulation coinage, this amazing large-format coin makes the ideal canvas of purest silver. From the 100th Anniversary of Women’s Right to Vote to the Victory Nickel of the Second World War, from the War of 1812 to the 50th Anniversary of the Canadian Flag, and from the Canadian Arctic Expedition to the Canadian Centennial, this amazing coin takes us on a journey through Canada’s most memorable moments. Its stunning antique finish lends even more depth, detail, and patina to a design we guarantee you’ve never seen before. The design of this amazing ultra high relief kilo, made of 99.99% pure silver features replicas of more than 35 historic Canadian circulation coins (including many circulating commemoratives) – all reproduced at the exact same diameters as the originals! The designs featured include: The legendary Voyageur dollar, first released in 1935. Of artist Alex Colville’s 1967 famed Canadian Centennial wildlife designs. Current Canadian circulation designs (including the 1-cent piece whose production ended in 2012) The Victory Nickel of World War II, issued from 1943 to 1945 The Celebrating Women’s Right to Vote dollar The Canadian Poppy 25-cent piece The Remembrance Day 1994 dollar The Canadian Arctic Expedition 25-cent piece The Heroes of 1812 Laura Secord 25-cent piece The War of 1812 2-dollar coin featuring HMS Shannon The Canadian Conservation Series Wood Bison 25-cent piece The 2015 50th anniversary of the Canadian flag 25-cent piece Each of the major portraits on Canadian circulating coinage since the Royal Canadian Mint opened in 1908, including the effigies of: King Edward VII. And Her Majesty Queen Elizabeth II. The diameter of each circulating coin reproduced on the kilogram is identical to its real-life counterpart! – Though the 1-cent coin was discontinued in 2012, its beautiful maple leaf twig reverse design by G. Kruger-Gray was so iconic that we just had to include it here. Canadian coinage has featured numerous effigies of the six monarchs who have reigned since Confederation, including four effigies of Her Majesty Queen Elizabeth II. Throughout her 63-year reign. What an Investment Piece! – Take a 150-year journey through the history of Canadian circulating coinage – all on a single coin! – Serious small change! This amazing ultra-high relief coin’s diameter spans a whopping 102.1 millimeters! – This numismatic history lesson displays important circulation reverses and obverses in their original diameters! – Ultra-Ultra-Ultra High Relief! The lofty 4.4 millimeter relief height raises this coin far and away above the 1.2 millimeter height that is standard for a one-kilogram coin! – Stunning Antique Finish! The antique finish lends extraordinary depth, detail, and patina to a collection of coinage spanning from the Georgian era to today’s circulation designs! – Luxurious display case! Your coin is encapsulated and presented in a beautiful solid Canadian maple wood display case with a black outer box. Extremely limited mintage of just 500 coins. An individually-numbered certificate of authenticity is included. Significant precious metal content. Your coin is crafted from one thousand grams of 99.99% pure silver. Technology Note – Purity. The Royal Canadian Mint refines the purest silver in the world. The RCM is also the only mint in the world to issue commemorative coins in a. Fine silver coin is 99.99% pure! A sensational rendering of a noble rooster. A veritable cock o’ the walk, captures the true essence of its character. The Chinese character for “Rooster” appears to the upper left, above the cock head. There are no legends on the obverse to detract from the power and the beauty of the dramatic design. Her Majesty, Queen Elizabeth II. In profile facing right. This portrait, the fourth effigy of the queen to appear on Canadian Coinage, was executed by the artist Susanna Blunt. The legend ELIZABETH II D. REGINA (“Elizabeth II, Queen by the Grace of God”), the date of issue and the denomination also appear. The coin is encapsulated and presented in a beautiful solid Canadian maple wood display case, lined with black velvet with a black outer box. 9999 Fine (Pure) Silver. Royal Canadian Mint engravers. The item “Canada 2017 Coin Circulating Coinage $250 1 Kilo Kilogram Silver High Relief Prf” is in sale since Friday, November 04, 2016. This item is in the category “Coins & Paper Money\Coins\ Canada\Commemorative”. The seller is “talismancoins” and is located in Saint Louis, Missouri. This item can be shipped worldwide. 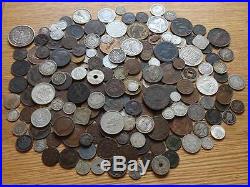 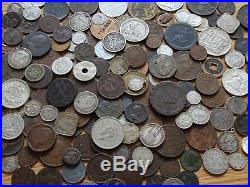 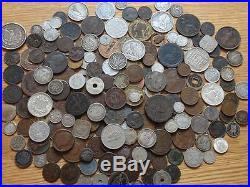 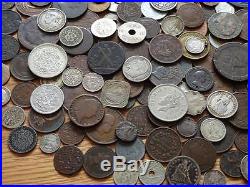 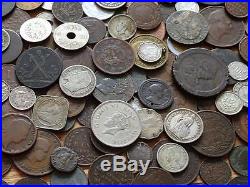 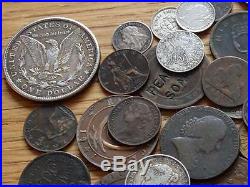 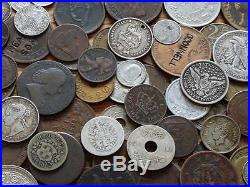 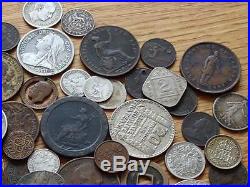 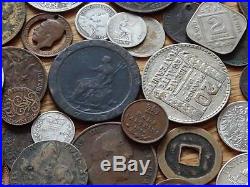 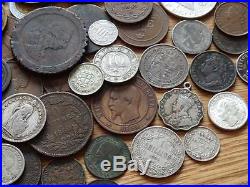 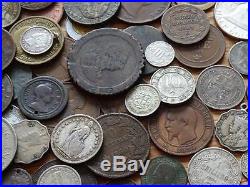 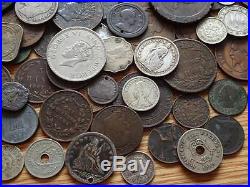 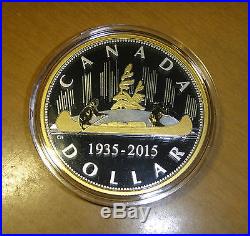 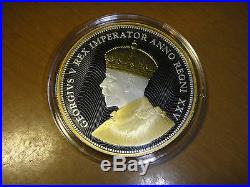 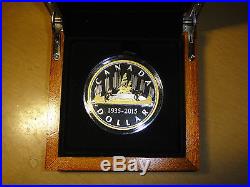 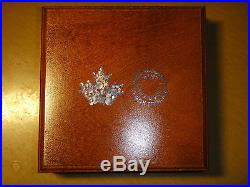 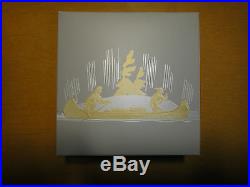 2015 Canada Renewed Silver Dollar Series: Coin #1 Voyageur 2 oz. SELECTIVE 99.99% GOLD PLATING ON BOTH THE OBVERSE AND REVERSE! The canoe, travellers, island, and pines are plated in 99.99% pure gold, and the King’s crown and mantle are also plated in 99.99% pure gold. First coin in our new “renewed silver dollar” series celebrating historic proof dollar designs. The series begins with Canada’s first silver dollar, designed by renowned sculptor Emanuel Hahn and first issued in 1935. LOW MINTAGE OF ONLY 2,200! An exceptionally low mintage of only 2,200 coins means this 2 oz. Coin will be highly sought after. Features the new Masters Club logoprinted prominently on the box sleeve. KING GEORGE V EFFIGY BASED ON 1935 DESIGN! The obverse features the effigy of King George V by British artist Percy Metcalfe from the original 1935 silver 1-dollar coin. Includes the legend GEORGIVS V REX IMPERATOR ANNO REGNI XXV (George V, King and Emperor, 25th Year of Reign). Includes removable insert and special certificate compartment. Your coin is GST/HST exempt. 99.99% pure silver. Proof with selective gold plating. Emanuel Hahn (reverse), Percy Metcalfe (obverse). Contact me if you have questions. Check out my other items. Be sure to add me to your favorites list. The item “2015 Canada Renewed Silver Dollar Series Coin #1 Voyageur 2 oz. Gold-Plated Coin” is in sale since Thursday, November 03, 2016. This item is in the category “Coins & Paper Money\Coins\ Canada\Commemorative”. The seller is “monkeyk_888″ and is located in Markham, Ontario. This item can be shipped to Canada, to United States.