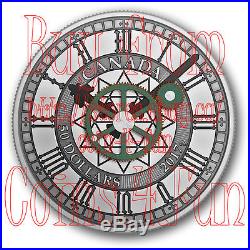 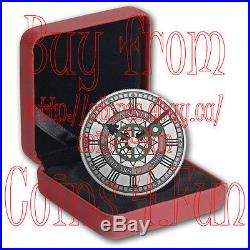 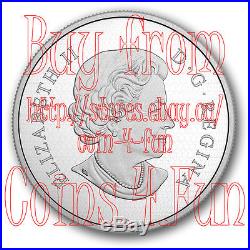 At the stroke of noon on July 1, 1927, the Peace Tower Clock and Carillon made their timely debut as Canadians celebrated Confederation’s Diamond Jubilee. Ninety years later, this commanding timepiece and its copper-clad apex remain the pride of Canadaa symbol of its political heart, and a national icon whose prominence is second only to our flag! Time marches on high atop the 92.2-metre tower on Parliament Hill, where the four clock faces continue to mark the passage of time for an entire nationin tragedy and in our finest hour. A stunning addition to your coin display! A PIECE OF ART AND A MINT FIRST! Celebrate the 90th anniversary of an iconic timepiece: the Peace Tower Clock. The two ­ gears are made from oxidized copper that originally clad the roofs of the Parliament Buildings. Your coin is a tangible piece of Canada’s architectural historyright in the palm of your hand! NO TWO COINS ARE QUITE ALIKE! To preserve its historical value. The copper has not been melted down. Any colour variations or markings occurred naturally during its time on the roofs of Parliament Hillthey also help to make each coin unique! A GLIMPSE AT THE INNER WORKINGS! Both gears have the same number of teeth as their real-life counterparts. AN AGED LOOK AND FEEL! Applied by hand, the coin’s antique finish enhances the precision engraving and gives it an aged look that reflects 90 years of history! The Royal Canadian Mint certifies all of its collector coins. Your coin is crafted from five ounces of 99.99% pure silver with a stunning diameter of 65.25 mm! Your coin is GST/HST exempt. The reverse design by Canadian artist Calder Moore features an antique finish that brings an aged elegance to this depiction of the Peace Tower Clock. Precision engraving re-creates one of the four identical faces that grace each side of the iconic clock tower, which rises up high above Parliament Hill in Ottawa, Ontario. The Roman numerals, minute markers and geometric-inspired centre pattern are all beautifully and faithfully reproduced on the reverse; in fact, the only engraved addition is the widening of the centre’s circular frame to include the engraved words “CANADA”, the year “2017″ and the face value, “50 DOLLARS”. The clock’s hands are attached to the centre of the coin, and provide an immobile base for the two gear wheels that provide a glimpse at a clock’s inner workings. They are exact replicas of two of the clock’s gears, albeit on a smaller scale: the larger wheel has 90 teeth while the smaller pinion has 32. For added historical value, these cogs are fashioned from copper that once clad the roofs of Canada’s Parliament Buildingsany colour variations or markings have been preserved to make each coin unique. The obverse features the effigy of Her Majesty Queen Elizabeth II by Susanna Blunt. The Peace Tower clock is our most famous clock and is set to Canada’s official time, as measured by the National Research Council’s atomic clock. Take a closer look at the number “4″: clock and watchmakers frequently use the Roman numerals “IIII” instead of “IV”, but that’s not always the case! Despite several compelling theories, there is no definitive explanation for this practicenor is it consistent, since Big Ben uses “IV” while the Peace Tower Clock uses IIII. Located in a small room inside the tower, the master clock runs on an electric motor, and it is mechanically connected to the 53-bell carillon’s keyboard. The bells ring out every 15 minutes, while the 10,160-kg bourdon rings out on the hour. Time moves forward, never backwardat least, that’s how the Peace Tower Clock works! When Daylight Saving Time (DST) comes to an end in autumn, the clock is manually stopped at 2 a. For a full hour before resuming after the extra hour. And when the clock needs to “spring ahead” for the start of DST, the carillon is temporarily disconnected before the hour hand is moved forward one hour. This coin re-creates the clock in 99.99% pure silver, but the actual clock’s markings are bronze and were cast at the old Victoria Foundry, at its former site in Ottawa’s LeBreton Flats. The roofs of the Parliament Buildings consist of copper panels over reinforced concrete. Newer copper panels are naturally brown and shiny; over time, exposure to oxygen, weather elements and pollution causes a chemical reaction that famously changes the copper’s colour to green! Your coin is encapsulated and presented in a Royal Canadian Mint-branded maroon clamshell with a black beauty box. 99.99% pure silver. (reverse), Susanna Blunt (obverse). I do leave feedback for everyone. The item “2017 Canada Peace Tower Clock 90th Anniversary 5 oz $50 Pure Silver Coin” is in sale since Tuesday, June 20, 2017. This item is in the category “Coins & Paper Money\Coins\ Canada\Commemorative”. The seller is “coins.4.fun” and is located in Richmond Hill, Ontario. This item can be shipped worldwide.
This entry was posted in canada and tagged 90th, anniversary, canada, clock, coin, peace, pure, silver, tower. Bookmark the permalink.