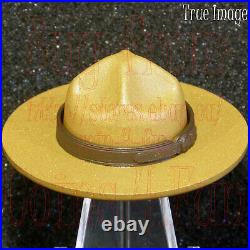 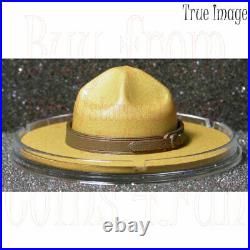 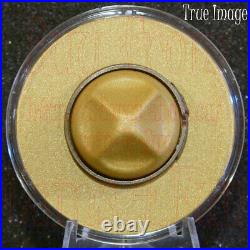 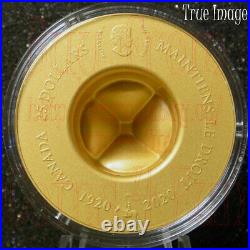 The year 2020 was a commemorative one for the Mounties: it marked 100 years since the Royal North West Mounted police was renamed the Royal Canadian Mounted Police and took on its federal policing responsibilities. Looking ahead to 2023, the Royal Canadian Mounted Police will be celebrating 150 years as Canada’s national police service. It’s proud of its history and the many milestones that have made the organization what it is today! To celebrate, we’ve engineered a never-before-seen 3D coin shape: an RCMP hat. Beneath the gold plating on the reverse, a special frosting captures the look of the hat’s felt material while brown gold plating (also a first) colours the bronze band. And take a look at what’s under that wide brimyou’ll find the RCMP motto and the RCMP rider from our 2020 2 oz. We salute Canada’s national police force by introducing another exciting first: an RCMP hat coin! Introducing our very first 3D RCMP hat coin! Designed as a replica of the RCMP uniform hat, this 2020 salute to Canada’s national police force features a taller crown and sharper angles than the helmet-shaped 2018 Lest We Forget coin. AN ICONIC SYMBOL: The wide-brimmed hat is instantly recognizable and, along with the RCMP’s famous Red Serge tunic, is a world-famous icon that is synonymous with law and order in Canada. FIRST-TIME USE OF BROWN GOLD: Another first: a special brown gold surface plating technique helps capture the look of the hat’s leather band made out of bronze. LOOKS LIKE FELT: On the reverse, special frosting beneath the gold plating mimics the look of feltjust like a real RCMP hat. A CANADIAN CELEBRATION: This coin is part of our salute to the Royal Canadian Mounted Police on the 100th anniversary of the merger of the Royal North-West Mounted Police and the Dominion Police. The merger established the RCMP as Canada’s national police service. EXTRA NOD: On the obverse, the brim includes the RCMP motto and the miniature image of an RCMP rider on horseback, as seen on the Royal Canadian Mint’s 2020 2 oz. A MUST HAVE FOR YOUR COLLECTION: Whether it’s for the love of a Canadian icon or minting innovations, our latest feat of engineering is the perfect new addition to your growing collection. It’s also the perfect gift or collectible to honour and recognize a friend or loved one’s years of service as a member of the RCMP. LIMITED MINTAGE: Only 6,500 of these coins are available worldwide. INCLUDES SERIALIZED CERTIFICATE: The Royal Canadian Mint certifies all of its collector coins. Design: This gold-plated coin was engineered to be a pure silver 3D replica of the Royal Canadian Mounted Police uniform hat. The reverse is a top view of the iconic hat and its Montana peak crown. For an added touch of authenticity, a special frosting beneath the gold plating on the reverse mimics the textured look of felt while the leather band is re-created using a brown gold surface plating technique (a first). On the obverse, the RCMP motto “MAINTIENS LE DROIT” (Defending the Law) is engraved on the brim along with the commemorative dates “1920 2020″ to mark 100 years since the organization was renamed the Royal Canadian Mounted Police and took on its federal policing mandate. The obverse also includes the word “CANADA”, the face value “25 DOLLARS”, a miniature version of the RCMP rider featured on the Royal Canadian Mint’s 2020 2 oz. Bullion coin (bottom), and the effigy of Her Majesty Queen Elizabeth II by Susanna Blunt (top). Did you know It wasn’t part of the official uniform until 1904. The hat has a wide brim that helps shield the eyes and face from the elements, and that’s why some members of the North-West Mounted Police (a predecessor to today’s RCMP) preferred it to the standard issue pith helmet or pillbox cap for patrol duty. Since it wasn’t part of the uniform at that time, members paid for the hats themselves, but that changed once it was adopted as part of the official uniform. Packaging: Like the 2018 helmet-shaped coin, this RCMP tribute piece comes in a custom-shaped capsule and clamshell insert that were specially designed to protect your new collectible. 99.99% pure silver with gold plating. I do leave feedback for everyone. The item “2020 RCMP Classic Mountie Hat $25 Pure Silver Gold-Plated Coin Canada” is in sale since Monday, May 17, 2021. This item is in the category “Coins & Paper Money\Coins\ Canada\Commemorative”. The seller is “coins.4.fun” and is located in Ontario. This item can be shipped worldwide.