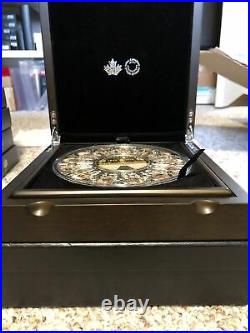 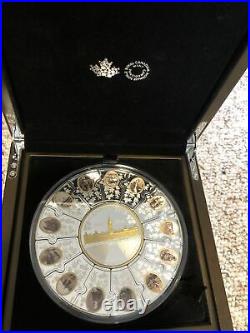 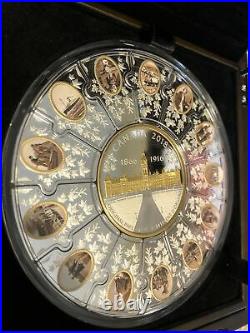 Never removed from case. This item is in the category “Coins & Paper Money\Coins: Canada\Commemorative”. The seller is “eurocast” and is located in this country: CA. This item can be shipped to Canada, United States. 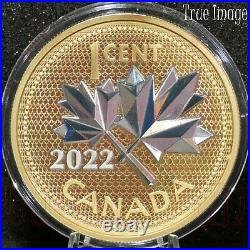 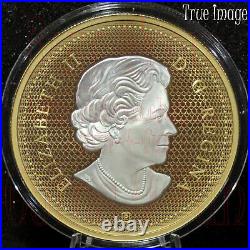 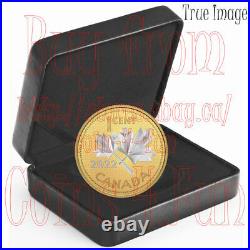 Anniversary of the Farewell to the Penny – 1 cent 5 oz. Pure Silver Reverse Gold-Plated Coin. A nostalgic look back! It was 10 years ago, in 2012, that the last Canadian penny was struck at our Winnipeg facility. Until that moment, the copper-plated cent was everywhere: it jingled in the pockets and purses of Canadians for generations filled countless coin jars and its maple leaf twig design was a part of our everyday lives. Now, a decade later, its iconic design has been given a new life and a modern twist on this 5 oz. Fine silver tribute, which has been enhanced with reverse gold plating to add a precious gleam. Canada’s penny as you’ve never seen it before! Own this 5 oz. Reverse gold-plated tribute to the penny. REMEMBERING THE PENNY, 10 YEARS LATER! Enjoy this nostalgic look back at Canada’s one-cent circulation coin, as we mark the 10. Anniversary of the last penny struck at our Winnipeg facility. The penny’s iconic maple leaf twig design is back, but there’s a twist! The twig and twin maple leaves have been given a more contemporary appearance, with geometric angles that add more depth than ever, and engraved facets that catch and reflect the light. This coin is crafted from 5 oz. Of 99.99% pure silver, which is only visible on the effigy and select design elements on the reverse. The rest of the coin is plated with beautiful yellow gold that outshines even the brightest copper penny. With its 65.25 mm diameter, this spectacular showpiece is more than three times the size of the original penny (19.05 mm). It weighs considerably more, too: 157.6 grams compared to the penny’s 2.35 grams. Only 1,500 are available to collectors worldwide. The Royal Canadian Mint certifies all of its collector coins. Gold plating fills the field, while the engraved relief consists of a multifaceted, geometric rendering of the iconic maple leaves and twig. The reverse also includes the face value “1 CENT”, the year “2022″ and the word “CANADA”. The obverse features a “P” composition mark indicating the gold plating, and the effigy of Her Majesty Queen Elizabeth II by Susanna Blunt. The last penny was struck in Winnipeg, Manitoba on May 4, 2012. Since the Mint opened its doors in 1908, we’ve minted. Of one-cent circulation coins, but we’ve also recycled over six billion of them since 2013. Unlike the other denominations of Canadian circulation coinage, the one-cent coin’s design remained largely unchanged after the maple leaf twig made its debut in 1937. The only exception was in 1967, when a rock dove designed by Alex Colville appeared on the penny to mark the 100. Your coin is encapsulated and presented in a black Royal Canadian Mint-branded clamshell with a black beauty box. 99.99% pure silver with reverse (yellow) gold plating. Matt Conacher (reverse), Susanna Blunt (obverse). I do leave feedback for everyone. This item is in the category “Coins & Paper Money\Coins: Canada\Commemorative”. The seller is “coins.4.fun” and is located in this country: CA. This item can be shipped worldwide.