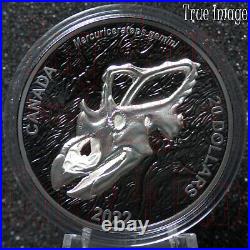 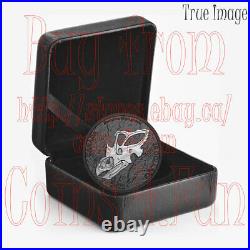 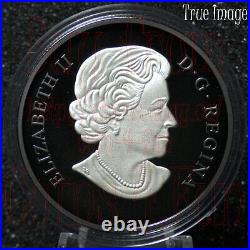 2021 Death Reaper coin is here. More Dinosaurs of Canada. A follow-up to 2021′s. Mercury’s Horned Face or. Is the featured star of our second. Coin, and the first things you’ll notice about this ceratopsid are the bony, wing-like protrusions on its head. Engraved on the coin’s reverse, its skull fossil is especially striking against the black rhodium-plated “rock” background, which pays tribute to the discovery that yielded another piece of Canada’s prehistoric past. Coin #2: Meet a relative of. Imagine the excitement of unearthing a new prehistoric species! Coin places you in the field and at the site of another discovery. The black rhodium background represents the hidden or unknown past. This dark design element keeps the focus on the engraved fossils that have helped paleontologists piece together the story of prehistoric Canada. Like the tyrannosaur on the first coin, this horned dinosaur is a relative “newcomer”-the 76-million-year-old. Was unveiled in 2014 and has never appeared on a coin until now. The fossil depicted on your coin has been verified for scientific accuracy by the Royal Tyrrell Museum of Palaeontology. Beneath the rhodium plating on your coin’s reverse, the engraved texture represents the thrill of discovery: it resembles the rock formation in Alberta’s Dinosaur Provincial Park, where a. Skull fragment was found. FOR DINO LOVERS OF ALL AGES! Dinosaurs are a popular theme with collectors and Canadians of all ages. They’re also an important part of Canada’s natural heritage. The Royal Canadian Mint certifies all of its collector coins. Designed by Canadian paleoartist Julius Csotonyi, the coin’s reverse features the fossilized skull of. A recently discovered horned dinosaur species. Beneath the black rhodium plating, the engraved texture represents the rock formation in Alberta’s Dinosaur Provincial Park where a key fossil fragment was found. The obverse also features rhodium plating behind the effigy of Her Majesty Queen Elizabeth II by Susanna Blunt. It’s always a thrill to illustrate the newest additions to Canada’s amazing diversity of ceratopsian (horned) dinosaurs, whose uniquely shaped neck shields functioned as visual signals. For Mercuriceratops, the challenge was to accurately portray the weird squamosal skull bone (resembling the mythical winged helmet of Mercury) while creatively rotating the skull so that the elongated head could fit within the circular rim of the coin! Julius Csotonyi, Paleoartist. Mercuriceratops is an example of a dinosaur species that’s known from a single bone only. Species of several groups of dinosaurs, like horned dinosaurs and duckbilled dinosaurs, are all very similar to each other and can often only be distinguished based on differences on one or a few bones. For example, duckbilled dinosaur species often only differ based on the shape of their crest. In horned dinosaurs, it’s often the shape of the bones forming the frill (shield behind the head) that allows paleontologists to recognize different species. In the case of Mercuriceratops, paleontologists found a bone of the frill that was unlike any that had ever been found for any other species. That’s how they knew they were dealing with a brand new species, even though they knew nothing else about the rest of the body. François Therrien, Curator of Dinosaur Palaeoecology, Royal Tyrrell Museum of Palaeontology. Its unusual frill may look scary, but it likely helped. To attract a mate. Unveiled in 2014, this six-metre-long herbivore was described from near-identical skull fragments of two individuals-one recovered from Dinosaur Provincial Park in Alberta and the other from the Judith River Formation in Montana (United States)-hence the species name. Means Mercury’s horned face. It was named after Mercury, the Roman messenger to the gods, who is often depicted with wings on his helmet. Your coin is individually encapsulated and presented in a Royal Canadian Mint-branded clamshell with a black beauty box. 99.99% pure silver with selective rhodium plating. Julius Csotonyi (reverse), Susanna Blunt (obverse). I do leave feedback for everyone. This item is in the category “Coins & Paper Money\Coins: Canada\Commemorative”. The seller is “coins.4.fun” and is located in this country: CA. This item can be shipped worldwide. 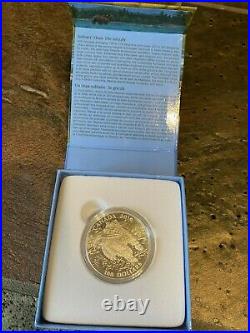 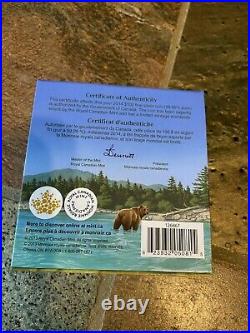 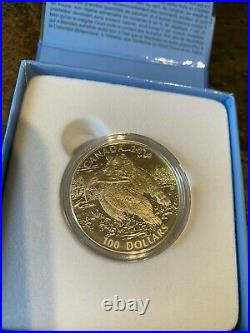 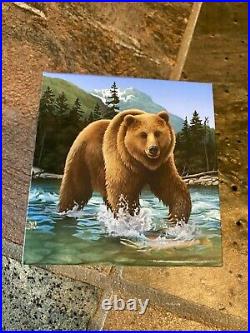 Item has never been displayed. Kept in storage only. Includes display box, certificate of authenticity, and protective sleeve. This item is in the category “Coins & Paper Money\Coins: Canada\Commemorative”. The seller is “wagamamajuliet” and is located in this country: CA. This item can be shipped to United States, Canada.